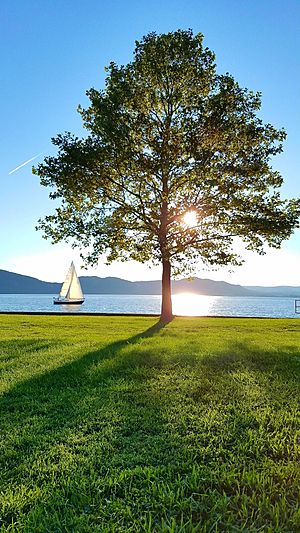 Croton Point Park is a Westchester County park in the village of Croton-on-Hudson.

In the 1800s the Underhill family owned the land that is now Croton Point Park. Grapes, watermelons, and apples were grown. A brickyard was also on the property. A few buildings built with these bricks are still standing at Croton Point. The park is also home to several historic sites such as a set of wine cellars from an old manor. 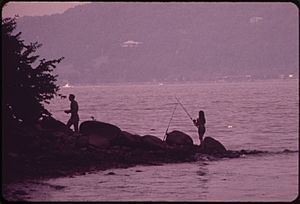 Fishing in the Hudson River from Croton Point Park, 1973

A substantial portion of the land on which the park is situated today was the site of a landfill, which was operated by the Westchester County government from 1927 to 1986. The landfill has since been capped off and restored to green space. A 1931 map shows the landfill area as marsh.

The park hosts a number of events each year, including the annual Hudson River Sloop Clearwater festival, the Croton Point Shindig, and Hudson River Eagle Fest.

All content from Kiddle encyclopedia articles (including the article images and facts) can be freely used under Attribution-ShareAlike license, unless stated otherwise. Cite this article:
Croton Point Park Facts for Kids. Kiddle Encyclopedia.