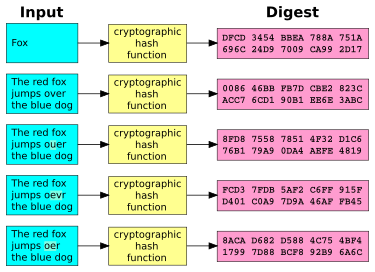 A cryptographic hash function at work. Even small changes in the source input (here in the word "over") drastically change the resulting output, by the so-called avalanche effect

A cryptographic hash function is a hash function which takes an input (or 'message') and returns a fixed-size string of bytes. The string is called the 'hash value', 'message digest', 'digital fingerprint', 'digest' or 'checksum'.

Functions with these properties are used as hash functions for a variety of purposes, not only in cryptography. Practical applications include message integrity checks, digital signatures, authentication, and various information security applications.

An attacker who can find any of the above computations can use them to substitute an authorized message with an unauthorized one.

Ideally, it should be impossible to find two different messages whose digests ("hash values") are similar. Also, one would not want an attacker to be able to learn anything useful about a message from its digest ("hash values"). Of course the attacker learns at least one piece of information, the digest itself, by which the attacker can recognise if the same message occurred again.

In various standards and applications, the two most commonly used hash functions are MD5 and SHA-1.

In 2005, security defects were identified showing that a possible mathematical weakness might exist, like attacks, and recommending a stronger hash function.

In 2007 the National Institute of Standards and Technology announced a contest to design a hash function which will be given the name SHA-3 and be the subject of a FIPS standard.

All content from Kiddle encyclopedia articles (including the article images and facts) can be freely used under Attribution-ShareAlike license, unless stated otherwise. Cite this article:
Cryptographic hash function Facts for Kids. Kiddle Encyclopedia.