Dacrycarpus dacrydioides or kahikatea (from its name in the Māori language) is a coniferous tree endemic to New Zealand.

The tree grows to a height of 55 metres (180 ft) with a trunk exceeding 1 metre (3 ft) in diameter, and is buttressed at the base. It is dominant in lowland forest and wetlands throughout the North and South Islands. Trees can live for at least 600 years. The leaves are spirally arranged; on young plants, they are awl-shaped, 3 to 8 mm long, and twisted at the base to lie spread to the sides of the shoot in a flat plane; on mature trees, they are scale-like, 1 to 3 mm long, and placed all round the shoot. The cones are highly modified, with the cone scales swelling at maturity into an orange to red, fleshy, aril with a single apical seed 3 to 5 mm in diameter. The seeds are dispersed by birds, which eat the fleshy scale and pass the seeds in their droppings.

Before extensive logging, trees of 80 m height were known. A specimen in Pirongia Forest Park in the Waikato region is often referred to as the tallest native tree in New Zealand at 66.5 metres (218 ft). This is however incorrect as the tree is only 55.1 metres (181 ft). The current tallest known kahikatea in New Zealand is actually a 56.4 metres (185 ft) tall tree located near the Matirangi Forest in Taranaki.

The tree was previously referred to by the misleading name "white pine", despite its not being a pine; the Māori name kahikatea is now more widely used (other Māori names are kaikatea, kahika, katea, kōaka, koroī).

Like many other species in the family Podocarpaceae, the classification of kahikatea has changed over time, having also been placed in the genera Podocarpus and Nageia. The Waikato still has small stands of natural Kahikatea. The most readily accessible is at Claudelands Bush in the Hamilton suburb of Claudelands which was previously a swamp. 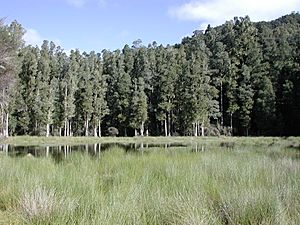 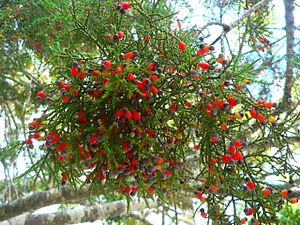 The timber was initially not so highly regarded by European settlers as it was less attractive, strong, or resilient to rot than the other coniferous timbers available such as totara. However, since the wood does not impart an odour, and is clean and lightweight, Kahikatea was used to make boxes for the exporting of butter when the refrigerated export became feasible from Australia and New Zealand in the 1880s. The butter was exported in 56 lb slabs, and kahikatea became less common as the export industry grew. Indeed, tall mature pure kaihikatea forest, a once distinctive and widespread wetland type, is all but gone except for very small patches mostly on the West Coast. The first bridge in Hamilton across the Waikato River was built mainly of Kahikatea about 1880 but the bridge quickly became unsafe due to rot. The piles (not of Kahikatea) are still visible in the vegetation alongside the Traffic (Bridge St.) Bridge.

Kahikatea was used for boat building up until the 1970s because of its long straight lengths. When 12% dry it is slightly lighter in weight than Kauri and white in colour. Kahikatea was also used as late as the 1980s to carve out waka, traditional vessels for Maori, in which they competed in various watersports in Kaituna Wetlands.

For Māori, the kahikatea had many uses. The fleshy aril or koroi was an important food resource, and was served at feasts in great amounts. The wood was also favoured for making bird spears. Soot obtained from burning the heartwood supplied a pigment for traditional tattooing (tā moko).

Kahikatea, along with other trees in privately owned forests, can only be harvested under a permit system and if sustainable harvesting techniques are used. There are still a few old-growth remnants of kahikatea left in the Waikato (for example, at Mangapu and Mokau).

However, most kahikatea stands in the Waikato lowlands are relatively young forest fragments, about 80–100 years old. These fragments have grown up around a few old trees left standing after most of the original forest was cleared for farming. Some stands still have their original seed trees around which the new forest grew. These massive trees, with trunks occasionally over 2 m across, are about 400–500 years old.

There are about 370 kahikatea fragments in the Waikato region. They are typically small, between 0.5 and 50 ha, with half of them less than 5 ha. Most of them grow on the river floodplains of the Waikato Basin, Hauraki Plains and Mokau River.

Because humans now control flood events and re-sow flood-damaged pasture, it is unlikely to see many new areas of kahikatea forest developing in the Waikato. Scientists estimate that more than 98 of percent of the pre-European kahikatea forest has been lost nationwide.

All content from Kiddle encyclopedia articles (including the article images and facts) can be freely used under Attribution-ShareAlike license, unless stated otherwise. Cite this article:
Dacrycarpus dacrydioides Facts for Kids. Kiddle Encyclopedia.