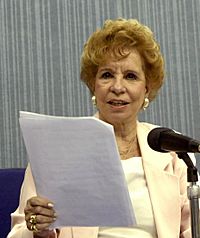 Daisy Lúcidi (10 August 1929 – 7 May 2020) was a Brazilian actress. She was born in Rio de Janeiro. Her best known role was as Valentina Miranda in the telenovela Passione. She also starred in Paraíso Tropical and Babilônia. Her best known movie role was as Elder Isaura in As Aventuras de Agamenon, o Repórter (2012).

On 4 May 2020, Lúcidi was hospitalized for COVID-19 in Rio de Janeiro. She died three days later on 7 May from the infection, aged 90.

All content from Kiddle encyclopedia articles (including the article images and facts) can be freely used under Attribution-ShareAlike license, unless stated otherwise. Cite this article:
Daisy Lúcidi Facts for Kids. Kiddle Encyclopedia.