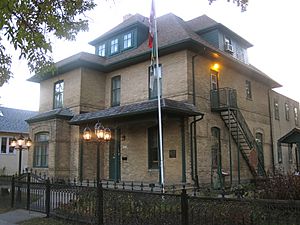 Daly House Museum is located in Brandon, Manitoba. It is a 2+1⁄2-story house (plus basement) that recreates a typical upper-class late-19th-century home. Much of the original architecture is intact, including hardwood floors, brick fireplace and an oak staircase. The following rooms are recreated in the museum:

The museum also includes a replica of an early-20th-century general store, as well as a room devoted to standing exhibits. It also has general exhibits in the lower floor devoted to local history.

The Daly house, located on 18th Street in Brandon, Manitoba, was built in 1882 for Thomas Mayne Daly, the first mayor of Brandon. When Daly and his family moved to Roseland, BC in 1896, the house was sold to Daly's law partner George Robson Coldwell. The Coldwell family lived in the house for approximately 32 years.

In 1930 the Children's Aid Society purchased the building and used it to house The Maples, a children's shelter that ran out of the building until 1971.

After five years of vacancy, the non-profit organization Brandon Museum Inc. took over the building. The museum opened in 1978 and was named after its original owner, Thomas Mayne Daly.

All content from Kiddle encyclopedia articles (including the article images and facts) can be freely used under Attribution-ShareAlike license, unless stated otherwise. Cite this article:
Daly House Museum Facts for Kids. Kiddle Encyclopedia.