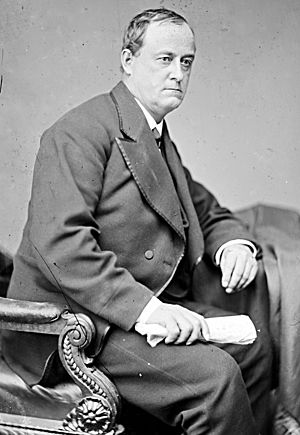 Born near New Marion, Indiana, Rea attended the common schools. He moved to Missouri with his parents, who settled in Andrew County in 1842. He engaged in agricultural pursuits near Rosendale. He taught school in the country 1849–1854. He studied law, was admitted to the bar in 1862, and commenced practice in Savannah, Missouri, in 1863. During the Civil War he enlisted in the Union Army and served successively as first lieutenant, captain, quartermaster, and lieutenant colonel. He resumed the practice of his profession in Savannah. He served as member of the board of education.

All content from Kiddle encyclopedia articles (including the article images and facts) can be freely used under Attribution-ShareAlike license, unless stated otherwise. Cite this article:
David Rea (politician) Facts for Kids. Kiddle Encyclopedia.