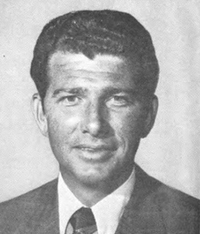 Marvin Dawson Mathis (November 30, 1940 – April 17, 2017) was an American politician. He served in U.S. Representative as a Democrat, representing Georgia's 2nd congressional district from 1971 through 1981.

Mathis was born in Nashville, Georgia. He studied at South Georgia College in Douglas, Georgia. From 1964 to 1970, he was news director of WALB-TV in Albany, Georgia.

In 1982 he tried to win his old seat in the house but lost to successor Charles Hatcher in the Democratic primary. He became a private advocate. He lived in Nashville, Georgia.

Mathis died in April 2017 in Tifton, Georgia from complications of pneumonia, aged 76.

All content from Kiddle encyclopedia articles (including the article images and facts) can be freely used under Attribution-ShareAlike license, unless stated otherwise. Cite this article:
Dawson Mathis Facts for Kids. Kiddle Encyclopedia.