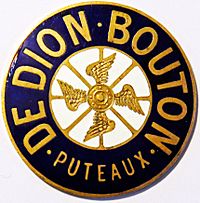 De Dion-Bouton is a French motor car company that began making cars in 1882. The company was started by Count Albert De Dion, Georges Bouton and Charles Trepardoux. Their first cars were steam powered and they made their first petrol internal combustion engine car in 1895.

A four-wheeled De Dion-Bouton et Trepardoux, a steam-powered car, said to be the oldest car in the world that still going, sold in 2007. The car had belonged to Count Albert De Dion. Built in 1884, it has a top speed of 35 miles per hour.

All content from Kiddle encyclopedia articles (including the article images and facts) can be freely used under Attribution-ShareAlike license, unless stated otherwise. Cite this article:
De Dion-Bouton Facts for Kids. Kiddle Encyclopedia.