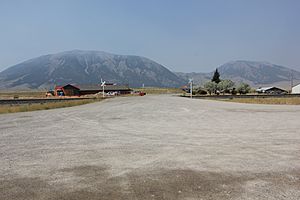 Dell is a census-designated place in Beaverhead County, Montana, United States. Dell has a post office with a ZIP code of 59724. Dell lies on Big Sheep Road next to I-15 and is northwest of Lima. As of 2017, Dell estimated a population of 35 people.

According to the Köppen Climate Classification system, Dell has a semi-arid climate, abbreviated "BSk" on climate maps.

All content from Kiddle encyclopedia articles (including the article images and facts) can be freely used under Attribution-ShareAlike license, unless stated otherwise. Cite this article:
Dell, Montana Facts for Kids. Kiddle Encyclopedia.