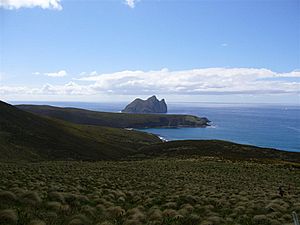 Dent Island: In the distance

The island is part of the Campbell Island group Important Bird Area (IBA), identified as such by BirdLife International because of its significance as a breeding site for several species of seabirds as well as the endemic Campbell teal and Campbell snipe.

The island is most famous for its Campbell teal, which were thought to have been extinct for more than 100 years until a small group was rediscovered there in 1975. Dent Island is free from predators, especially the rats whose introduction on Campbell Island led to the extinction of the teal there. However, the suitable habitat for the teal on Dent Island is much more limited than its 26-hectare (64-acre) area would suggest, because a large area of the island is bare rock.

The Campbell teal conservation programme started in 1984 when 4 birds were transferred from Dent Island to the Mount Bruce Wildlife Centre. In 1997, a census carried out on Dent Island showed that its Campbell teal population had declined to dangerous levels with only three birds being found.

However the conservation and breeding has been very successful, and in recent years many teal have been reintroduced onto Campbell Island itself, where there is now a population of over a hundred. Rats were eventually eradicated from Campbell Island in 2001.

All content from Kiddle encyclopedia articles (including the article images and facts) can be freely used under Attribution-ShareAlike license, unless stated otherwise. Cite this article:
Dent Island, New Zealand Facts for Kids. Kiddle Encyclopedia.