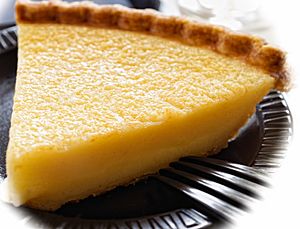 Desperation pies are pies in American cuisine made using staple ingredients like butter, sugar, eggs and flour, and making use of other ingredients that cooks had on hand to substitute for ingredients that were out of season or too expensive. These pies were more common before refrigeration and canned pie fillings, and during times of hardship like the Great Depression and rationing of World War II.

Before refrigeration, homemakers could only cook with ingredients that were in season, and so could not make fruit pies like apple pie when the fruits were not available or prices too high. Green tomato pie was commonly made as a mock apple pie or mock mincemeat pie in the 19th-century.

Vinegar pies evolved in the cuisine of the Midwestern United States as a substitute for lemons to balance the sweetness of custard pie filling. Shoofly pie, chess pie and sugar pie were also common pies of the 19th-century made with pantry staples. Buttermilk pie is also a desperation pie.

All content from Kiddle encyclopedia articles (including the article images and facts) can be freely used under Attribution-ShareAlike license, unless stated otherwise. Cite this article:
Desperation pies Facts for Kids. Kiddle Encyclopedia.