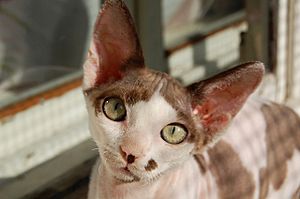 The Devon Rex is a type of cat, which was first born in England during the late 1950s. The first Devon Rex was discovered by Beryl Cox in Buckfastleigh, Devon, UK, in 1959.

They are thin and have large ears. Devon Rex cats, or Devon Rexes, are known to be very smart. Their fur is curly or wavy and is very soft. They are similar to Cornish Rex cats, who also have curly, soft fur.

They are smaller than most cats, weighing between 5 to 10lbs (2 to 4kg) when fully grown.

All content from Kiddle encyclopedia articles (including the article images and facts) can be freely used under Attribution-ShareAlike license, unless stated otherwise. Cite this article:
Devon Rex Facts for Kids. Kiddle Encyclopedia.