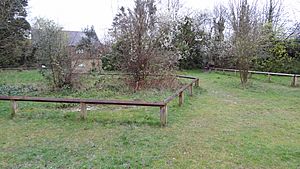 The site was occupied by three houses which were bombed during the Second World War. The rubble was then cleared and the area was used as an informal playground until the early 1990s, when it was converted by the Council to be used for nature conservation. Most of the site is neutral grassland, but it has areas of chalk grassland, scrub and trees. A notable species is the small blue butterfly, which is rare in the borough. Plants include the nationally scarce ivy broomrape, and kidney vetch and bird's-foot trefoil.

The site is located at the corner of Devonshire Avenue and Devonshire Road.

All content from Kiddle encyclopedia articles (including the article images and facts) can be freely used under Attribution-ShareAlike license, unless stated otherwise. Cite this article:
Devonshire Avenue Nature Area Facts for Kids. Kiddle Encyclopedia.