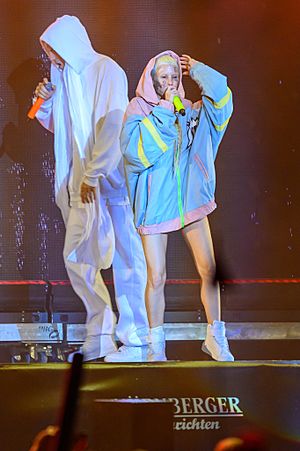 Die Antwoord (Afrikaans: "The Answer") is a South African rap band. The main singers are Yolandi Visser and her husband Ninja. They released their first album $O$ in 2009. In 2012 their second album Ten$ion was released. Four singles were released from the album.

All content from Kiddle encyclopedia articles (including the article images and facts) can be freely used under Attribution-ShareAlike license, unless stated otherwise. Cite this article:
Die Antwoord Facts for Kids. Kiddle Encyclopedia.