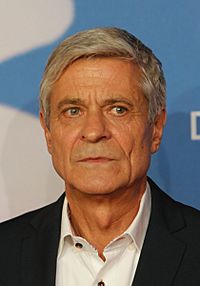 Dietrich Adam (16 October 1953 – 2 November 2020) was a German actor. He was known for his roles as Friedrich Stahl in the series Storm of Love between 2013 and 2017, and for his role in the renowned German police series Tatort.

He also made appearances in the television series Inga Lindström and Tonio & Julia. Adam was born in Göttingen, Germany.

All content from Kiddle encyclopedia articles (including the article images and facts) can be freely used under Attribution-ShareAlike license, unless stated otherwise. Cite this article:
Dietrich Adam Facts for Kids. Kiddle Encyclopedia.