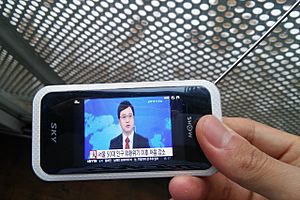 Digital multimedia broadcasting, or DMB, is a technology that allows to send digital signals to mobile devices, such as mobile phones. This makes it possible to listen to radio or watch television on such devices.

This technology was developed to replace earthly analog radio broadcasting. But, the technology can include more data in limited electric waves. It can transmit not only sound data that original object, but also DVD level movie data.

DMB is based on Eureka 147 DAB standard which is the European standard, and similar competing technologies is the mobile TV standard, DVB-H. The earthly DMB is decided to the ETSI standard (TS 102 427 and TS 102 428). Now, Republic of Korea can exercise for source of the DMB technology, the satellite DMB broadcast first began in Japan than in the Republic of Korea. In the March 13, 2004, TU Media playing a leading role in business and satellite DMB insert the world's first satellite for with Japan's partner, MBCo DMB 'hanbyeol'. However, In Republic of Korea, selection process for operators was long and put off service, the MBCo in Japan became first DMB country to start the full service all 40 of the channel from 19 October 2004.

DMB in Republic of Korea

DMB can be received, when attach DMB receiver to the vehicle, or buy mobile phone has the ability to receive DMB, personal portable receiver or receiver which type of output to the monitor when connect personal computer. But there was a problem that the satellite DMB and earthly DMB is not compatible with each other, so user should purchased each terminal separately. However, the Samsung throw open the door to watch satellite DMB and earthly DMB one of the terminals by come out with SPH-B4100. But TU Media side,the satellite DMB service provider rejected the plan, the possibility of the activation of these two-way receiving terminal is currently unclear.

All content from Kiddle encyclopedia articles (including the article images and facts) can be freely used under Attribution-ShareAlike license, unless stated otherwise. Cite this article:
Digital Multimedia Broadcasting Facts for Kids. Kiddle Encyclopedia.