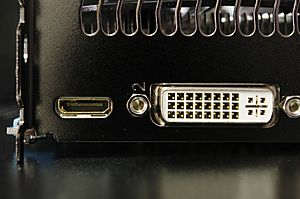 The Digital Visual Interface (or DVI) is a video interface standard. It is used to send video between a source (such as a personal computer) and a display (such as a monitor). This interface cannot be used to transmit audio unless it is connected to a High-Definition Multimedia Interface (HDMI) converter. HDMI and DVI use the same protocol for signalling, named Transition-minimized differential signaling.

HDMI is a newer video interface standard. Many laptops still have an old-fashioned VGA connector. Many models in the 2010s have HDMI ports. Fewer laptops have DVI.

DVI was created by the Digital Display Working Group (DDWG). It was created to replace the "legacy analog technology" VGA connector standard. DVI is designed to carry uncompressed digital video data to a display. It works very well with the HDMI standard in digital mode (DVI-D), and VGA in analog mode (DVI-A). It is also found in some television sets even though it has been widely replaced by HDMI.

All content from Kiddle encyclopedia articles (including the article images and facts) can be freely used under Attribution-ShareAlike license, unless stated otherwise. Cite this article:
Digital Visual Interface Facts for Kids. Kiddle Encyclopedia.