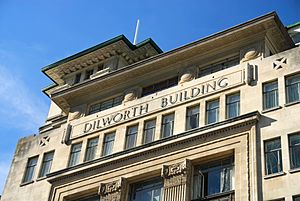 Decorative elements on the upper floors.

The Dilworth Building is a heritage mixed-use (residential apartments and shops on the ground floor) building at the corner of Customs Street and Queen Street in the Auckland CBD, New Zealand. The building by William Gummer & Reginald Ford was constructed between 1925 and 1927, and is listed as a "Historic Place - Category I" by Heritage New Zealand.

At the lower entry to Queen Street, the building was once envisaged as one half of a 'gateway' to the city, and hailed as a visionary concept. However, the mirroring building on the opposite side of Queen Street was never constructed.

It has housed the American consulate, and during World War II served as headquarters for the U.S. Army.

All content from Kiddle encyclopedia articles (including the article images and facts) can be freely used under Attribution-ShareAlike license, unless stated otherwise. Cite this article:
Dilworth Building Facts for Kids. Kiddle Encyclopedia.