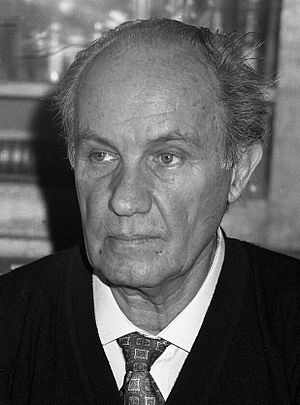 Dinu C. Giurescu (15 February 1927 – 24 April 2018) was a Romanian historian and politician. He moved to the United States in 1988. His best known work was published in the U.S. titled The Razing of Romania's Past, an analysis of the Nicolae Ceaușescu regime's policy toward Romania. He returned from exile in 1990, whereupon he became a member of the Romanian Academy.

In 2012, he was elected to the Chamber of Deputies for a Bucharest seat, representing the Conservative Party.

All content from Kiddle encyclopedia articles (including the article images and facts) can be freely used under Attribution-ShareAlike license, unless stated otherwise. Cite this article:
Dinu C. Giurescu Facts for Kids. Kiddle Encyclopedia.