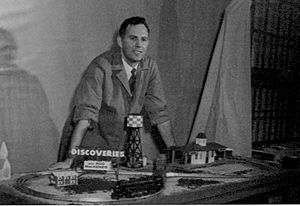 Discoveries is a Canadian youth science television series which aired on CBC Television in 1957.

This series is distinct from an Ann Arbor, Michigan-produced Discoveries science series which was presented by Mary Lela Grimes and broadcast on CBC Television from July to September 1959.

All content from Kiddle encyclopedia articles (including the article images and facts) can be freely used under Attribution-ShareAlike license, unless stated otherwise. Cite this article:
Discoveries (TV series) Facts for Kids. Kiddle Encyclopedia.