Logo of the park

Discovery Green is an 11.78-acre (47,700 m2) public urban park in Downtown Houston, Texas, bounded by La Branch Street to the west, McKinney Street to the north, Avenida de las Americas to the east, and Lamar Street to the south. The park is adjacent to the George R. Brown Convention Center and Avenida Houston entertainment district. Discovery Green features a lake, bandstands and venues for public performances, two dog runs, a playground, and multiple recreational lawns.

In the early 2000s, a public–private partnership between the City of Houston and a group of local philanthropic organizations, including the Kinder Foundation, was formed with the goal of constructing a new public green space in Downtown. This partnership financed the purchase of a series of surface parking lots on the east side of Downtown. Following the completion of land purchases in 2004, the Discovery Green Conservancy and the City jointly raised $125 million to construct the park. The design of the park, led by landscape architecture firm Hargreaves Associates, began in 2005. Discovery Green's public opening occurred on April 13, 2008; during the first two months of operation, an estimated 250,000 people visited the park.

The City of Houston acquired a portion of the land in front of the George R. Brown Convention Center in 2002. When the rest of the property went up for sale, a group of philanthropists led by Maconda Brown O’Connor of the Brown Foundation, and Nancy G. Kinder of the Kinder Foundation approached then-Mayor Bill White with their idea of turning the space into an urban park. The Mayor agreed and became a strong advocate of a public-private partnership was developed for the $125 million project. Several other philanthropic foundations joined the effort, including the Wortham Foundation and the Houston Endowment, Inc.

The City of Houston purchased the remainder of the land in 2004 and created the framework for the park’s construction and operations, including the role of the new organization, Discovery Green Conservancy, incorporated in 2004.

When the Houston City Council approved the contracts to provide partial funding and support to the park, it also mandated that the “public at large” be engaged in the design and development of the park. With the guidance of Project for Public Spaces, the Conservancy mounted the large public meetings and smaller focus groups to solicit public feedback. This feedback became the basis for the park’s programming.

Ever since the opening in 2008, the park has added upon. An estimate of $1 billion worth of buildings, offices, hotels, and housing projects were added to the park's surroundings.

In 2009 the One Park Place opened. A high-end residential tower that houses 346 units. On 2011, the Hess Tower was built, a 29-story office building. On 2016, the Marriott Marquis convention hotel was built north of the park. A hotel that holds over 1,000 rooms.

Hargreaves Associates and their team of architects, engineers, and artists took thirteen months to design and finalize the park. Notable challenges would be the dense intersection and the intricate design of implementing the garage with the surface park.

The park is placed in the center of two juxtaposing cross axes.

The linear plaza is lined by a multitude Mexican Sycamore trees and uniquely designed pavement.

Due to the straight nature of the path, it supports farmers markets, art fairs and parades. 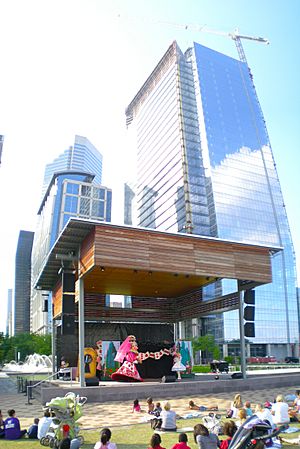 On occasions Discovery Green has an ice skating rink. 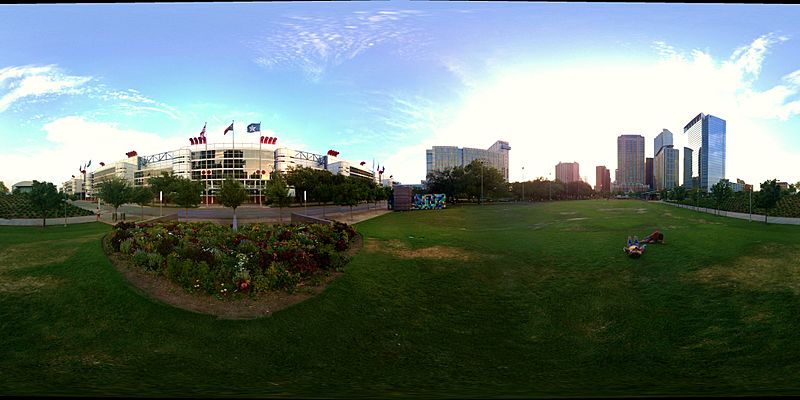 Discovery Green offers a variety of programming throughout the year. All events at the park are free and open to the public, unless otherwise noted. Discovery Green presents Houston's performing, literary and visual art in its Art Series. Discovery Green's Entertainment Series offers movies, Extreme Wii competitions, and concerts by musicians that present a variety of Gulf Coast and Central Texas sounds. The Healthy Living in the Park series offers a weekly urban market and exercise classes such as Pilates, Yoga, Parkour and Zumba as well as a Hip2BFit exercise class just for kids. The Families & Children Series offers hands-on workshops and activities suitable for children and their parents.

On weekends, families can visit the park, put their pets in one of two dog runs and watch their kids play on the playground while they discard their newspapers and cans into recycling bins.

All content from Kiddle encyclopedia articles (including the article images and facts) can be freely used under Attribution-ShareAlike license, unless stated otherwise. Cite this article:
Discovery Green Facts for Kids. Kiddle Encyclopedia.