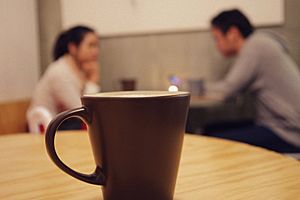 A conversation is civil communication by two or more people, often on a particular topic. William F. Buckley's Firing Line, the Dick Cavett Show, and many other television programs described as "talk shows" are exercises in conversation. Conversations are the ideal form of communication from at least one point of view, since they allow people with different views of a topic to learn from each other. A speech, on the other hand, is an oral presentation by one person directed at a group.

Conversers naturally relate the other speaker's statements to themselves, and insert themselves (or some degree of relation to themselves, ranging from the replier's opinions or points to actual stories about themselves) into their replies. For a successful conversation, the partners must achieve a workable balance of contributions. A successful conversation includes mutually interesting connections between the speakers or things that the speakers know. For this to happen, converser's must find a topic on which they can relate in some sense. 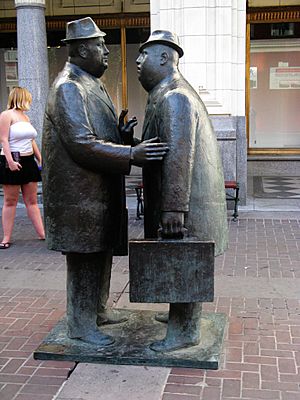 Conversers will often find that the conversation suddenly dies when everyone simultaneously runs out of things to say. A remedy for this phenomenon is to have another topic readily at hand.

Another oddity about conversations is how broadly the subject can change over the length of the conversation, even in as little as a few minutes. For example, people can start the conversation with something as highly-technical as SQL joins, and end up all the way at discussing the history of English dictionaries.

Topics of conversation that are often contentious include religion, politics, and philosophy. Topics that are good for producing fruitful discussion include films, books, television or other arts, current events, projects, hobbies, one's work or school life, one's family, and mutual friends.

Conversations do not have to happen in person, they can happen over the telephone or on the Internet.

All content from Kiddle encyclopedia articles (including the article images and facts) can be freely used under Attribution-ShareAlike license, unless stated otherwise. Cite this article:
Conversation Facts for Kids. Kiddle Encyclopedia.