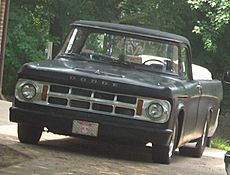 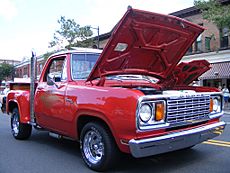 The D Series were pickup trucks made by the Dodge division of Chrysler. These were made from 1961 to 1980. From 1981 on, these trucks were renamed Dodge Ram.

The same basic designs were kept through 1993. The 1994 Ram had a completely different design.

All content from Kiddle encyclopedia articles (including the article images and facts) can be freely used under Attribution-ShareAlike license, unless stated otherwise. Cite this article:
Dodge D Series Facts for Kids. Kiddle Encyclopedia.