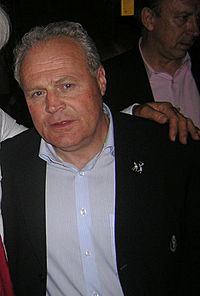 Dominique D'Onofrio (18 April 1953 – 12 February 2016) was an Italian-born Belgian footballer, coach and later chairman. He was born on in Castelforte, Italy. He played for R.R.F.C. Montegnée during the 1970s. He was the head coach of Standard de Liège for almost ten years.

All content from Kiddle encyclopedia articles (including the article images and facts) can be freely used under Attribution-ShareAlike license, unless stated otherwise. Cite this article:
Dominique D'Onofrio Facts for Kids. Kiddle Encyclopedia.