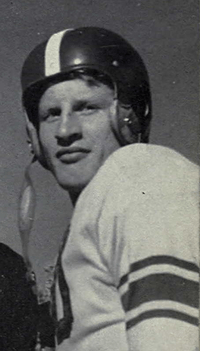 Stonesifer was born in Chicago, Illinois. He served in the Army Air Forces during World War II. He played college football for Northwestern University's Wildcats. Stonesifer died on October 15, 2021 at the age of 94.

All content from Kiddle encyclopedia articles (including the article images and facts) can be freely used under Attribution-ShareAlike license, unless stated otherwise. Cite this article:
Don Stonesifer Facts for Kids. Kiddle Encyclopedia.