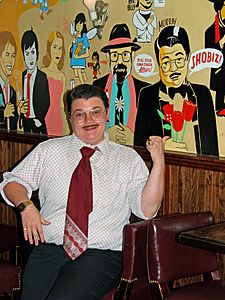 Drag kings are female performance artists who dress in male clothes. They play male gender roles as part of an individual or group routine. Drag kings may be straight, lesbian or transgender. They often perform as macho male characters, like construction workers and rappers.

In the late 1800s/early 1900s, several drag kings became British music hall stars. British pantomime has preserved the tradition of women in male roles. Starting in the mid 1990s, drag kings started to have the fame and attention for which drag queens are known.

The term drag king was first used in print in 1972.

Drag kings are mostly a part of lesbian culture. They can be most often seen at lesbian festivals or bars. However, not all drag kings are lesbians.

All content from Kiddle encyclopedia articles (including the article images and facts) can be freely used under Attribution-ShareAlike license, unless stated otherwise. Cite this article:
Drag king Facts for Kids. Kiddle Encyclopedia.