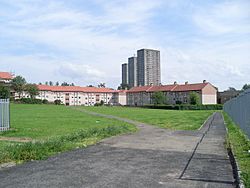 Drumchapel is a part of Glasgow, Scotland. It became part of Glasgow in 1938. Housing for about 30,000 people was built in the 1950s to help with overcrowding in Glasgow. At first there was only one post office and one telephone box. Drumchapel did not get its first shopping centre until the early 1960s. Local residents call it "The Drum".

All content from Kiddle encyclopedia articles (including the article images and facts) can be freely used under Attribution-ShareAlike license, unless stated otherwise. Cite this article:
Drumchapel Facts for Kids. Kiddle Encyclopedia.