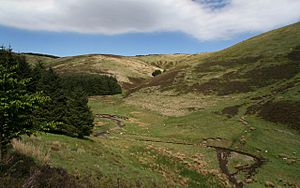 The Dryfe Water is a river in Scotland about 18 miles in length which flows into the River Annan at , near Lockerbie. It starts at on the southern slopes of Loch Fell, near Moffat, and then flows along a narrow valley to the Annan.

Dryfe Water gives its name to the parish, Dryfesdale, and the common Scottish surname, Drysdale. A second name is the much less common surname Dryfe (or Drife). The meaning of the word Dryfe is unknown. It may be from the Norse, Anglo-Saxon or Brythonic languages which were all used at different times in Dumfriesshire.

All content from Kiddle encyclopedia articles (including the article images and facts) can be freely used under Attribution-ShareAlike license, unless stated otherwise. Cite this article:
Dryfe Water Facts for Kids. Kiddle Encyclopedia.