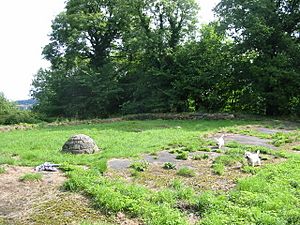 Duffield Castle was a Norman Castle in Duffield, Derbyshire. The site is a Scheduled Ancient Monument.

The rocky site was easy to defend, because it was surrounded by the river in three sides and hard to climb. It is not clear whether the site was inhabited in prehistoric times. The Roman army might have been there to protect the ford nearby where people from Lutudarum Wirksworth passed before joining Rykneld Street at Derventio (now part of Derby) which was N-shaped route for the North Sea ports.

Ancient items of Anglo-Saxons have been found there. They suggest that Saxon Thane named Siward or his relatives might have occupied the site. Also, many Roman or Romano-British pottery has been found, including roof tiles of Roman pattern. Some of them were kept in the Derby Museum, but others kept in the Parish Room were unfortunately lost.

Henry de Ferrers (Ferrars) faithfully served King William and was given land in Derbyshire, which became known as Duffield Frith. It was between Heage and Shottle on the North, and Tutbury on the South. He built Tutbury Castle as his main residence. He built another castle at Duffield to protect north side of his land. This castle was probably built of wood.

His third son, Robert, fought the Scots in the Battle of the Standard in 1138, and became the first Earl of Derby. 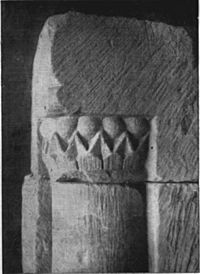 His great grandson, William, became the Earl in 1162. He supported King's sons when they resisted Henry II, and finally both castles were destroyed in 1173.

William II was favored by King John, and took back the land of Wirksworth, Ashbourne, and Horston Castle (Horsley). The castles at Tutbury and Duffield were rebuilt with stone. William III was also favored as William II was.

The next Earl (the 7th generation), Robert, fought against Henry III and Tutbury Castle was destroyed. Once the king forgave Robert, but he resisted again and was defeated in battle at Chesterfield. He lost his land in 1269 and Duffield Castle was destroyed. His lands were given to Prince Edmund, who became first Earl of Lancaster shortly later.

The castle was completely destroyed. Most of the stones were taken away as materials of other buildings, and the place gradually retuned to wild.

When the site was surveyed, the base of a traditional Norman motte and bailey castle was found with a large rock on it. The size of the rock was really remarkable, about 98 feet in length and 95 feet in width, only slightly smaller than the White Tower in London.

The grounds were saved with definite shape of foundations, and transferred to the National Trust in 1899. For many years, Parish Council was in charge of the site, but recently the role was handed down to the Trust.

Other surveys in the 1930s and in 1957 verified the residence before the arrival of the Normans, because many Romano‑British items were found.

A geophysical investigation of the site was carried out by the University of Bradford in 2001. Traces of other structures to the south and the southeast were found, and they appeared to date from the same period. The Trust is planning to raise necessary funds to carry out further investigations.

All content from Kiddle encyclopedia articles (including the article images and facts) can be freely used under Attribution-ShareAlike license, unless stated otherwise. Cite this article:
Duffield Castle, Derbyshire Facts for Kids. Kiddle Encyclopedia.