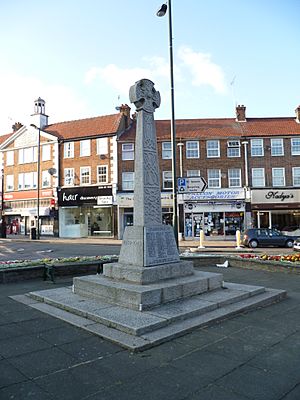 East Barnet War Memorial is a memorial to the dead of the First and Second World Wars from East Barnet, London. It was unveiled on 27 June 1920 and originally stood on the crossroads of East Barnet Road and Church Hill Road, but was later moved a short distance so that it now stands in front of the Brookside Methodist Church.

As a child, Catherine Loveday was puzzled by the absence of her father's name on the East Barnet War Memorial, so in later life she launched a campaign to have his name added to the memorial, which it was in 1995. At that time, it was the only Second World War name to be included but Loveday later succeeded in having the names of a further 35 men added. She then moved on to the memorials at New Barnet and Hendon.

All content from Kiddle encyclopedia articles (including the article images and facts) can be freely used under Attribution-ShareAlike license, unless stated otherwise. Cite this article:
East Barnet War Memorial Facts for Kids. Kiddle Encyclopedia.