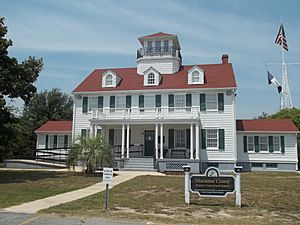 East Beach Station (or US Coast Guard Station-St. Simons Island or Historic Coast Guard Station) is a station of the U.S. Coast Guard in St. Simons, Georgia, United States, located at 4201 1st Street. It was built in 1936 as a part of the Works Progress Administration initiated by President Franklin D. Roosevelt. The Coast Guard Station played a part in World War II when it helped save the crew of two merchant ships, the SS Oklahoma and the Esso Baton Rouge, both tankers. These two ships were torpedoed by a German submarine U-123. The station is one of the forty-five originally built by President Roosevelt, and is one of the few that have survived to this day.

The station was added to the National Register of Historic Places in 1998.

All content from Kiddle encyclopedia articles (including the article images and facts) can be freely used under Attribution-ShareAlike license, unless stated otherwise. Cite this article:
East Beach Station Facts for Kids. Kiddle Encyclopedia.