Echizen washi (越前和紙code: ja is deprecated )is a type of Japanese paper that is made in Echizen, Fukui Prefecture, Japan. Echizen washi is the best in Japan in terms of quality, variety, and production volume. There are many types of Echizen washi. Echizen Hoshoshi (越前) and Echizen Torinokogami (越前鳥子紙) are Echizen washi that designated important intangible cultural property of Japan. Washi is made from three main materials such as Kozo, Mitsumata, Gampi. Hemp and wood pulp are also materials.

The Birthplace of Paper Money.

During the Edo period (1603-1868), the Fukui domain produced paper money that could be used for transactions within the domain, and was one of the first in Japan to use paper money. Later, in the Meiji era (1868-1912), paper from Goka, ‘Echizen washi’, was also used for banknotes issued by the government. Although today's yen banknotes are not printed on Goka paper, it is no exaggeration to say that the paper produced here is the direct ancestor of Japan's modern banknotes.

There is a legend about the origin of Echizen Washi. The Legend of Kawakami Gozen.

Long ago, a woman appeared at the upper reaches of the river that flowed through Goka. She said to the people of the village, "This area's many mountains may make it ill-suited for farming, but by using the area's pure, clean water you can make a living from making paper," and taught the villagers how to make paper. The thankful villagers asked what her name was, but all she said was, "I live upstream on the Okamoto River," and with that she vanished. The villagers called her Kawakami Gozen (literally "the lady of the upper reaches"), and dedicated Okamoto shrine to her as the goddess of paper-making.

The Goka area consists of the five villages of Oizu, Otaki, Iwamoto, Shinzaike, and Sadatomo. This area constitutes the “Echizen washi” and from the 6th century to now, paper making has been continued.

In the Udatsu Museum and Workshop, visitors can see how artisans make Echizen washi by using traditional tools and technique.

Visitors can create their own original Japanese paper. 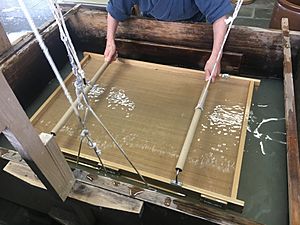 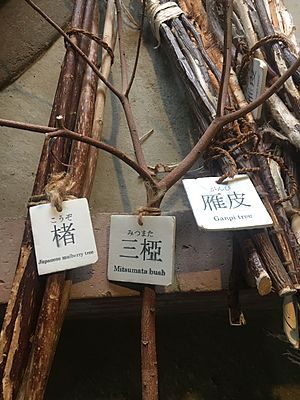 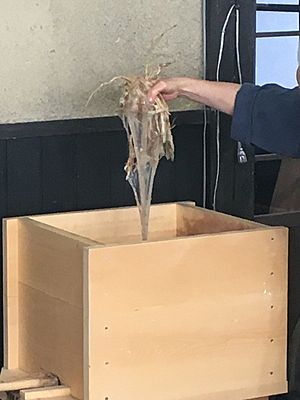 All content from Kiddle encyclopedia articles (including the article images and facts) can be freely used under Attribution-ShareAlike license, unless stated otherwise. Cite this article:
Echizen Washi Facts for Kids. Kiddle Encyclopedia.