Kids Encyclopedia Facts
This page is about the overall economy of the U.S. state. For theYork City, see Economy of New York (disambiguation).

The economy of the State of New York is reflected in its gross state product in 2015 of $1.44 trillion, ranking third in size behind the larger U.S. states of California and Texas. If New York State were an independent nation, it would rank as the 12th or 13th largest economy in the world, depending upon international currency fluctuations. However, in 2013, the multi-state, New York City-centered Metropolitan Statistical Area produced a gross metropolitan product (GMP) of nearly US$1.39 trillion, while in 2012, the corresponding Combined Statistical Area generated a GMP of over US$1.55 trillion, both ranking first nationally by a wide margin and behind the GDP of only twelve nations and eleven nations, respectively.

New York City and the surrounding New York metropolitan area dominate the economy of the state. Manhattan is the leading center of banking, finance, and communication in the United States and is the location of the New York Stock Exchange (NYSE) on Wall Street. Many of the world's largest corporations locate their home offices in Manhattan or in nearby Westchester County. Manhattan contained over 500 million square feet (46.5 million m2) of office space in 2015, making it the largest office market in the United States, while Midtown Manhattan, with nearly 400 million square feet (37.2 million m2) in 2015, is the largest central business district in the world. The state also has a large manufacturing sector, which includes printing and publishing and the production of garments, furs, railroad rolling stock, and bus line vehicles. Some industries are concentrated in upstate locations also, such as ceramics and glass (the southern tier of counties), microchips and nanotechnology (Albany), and photographic equipment (Rochester). New York's agricultural outputs comprise dairy products, cattle and other livestock, vegetables, nursery stock, and apples.

A tree map showing New York State's economy, by industry by percent of total employment, according to the American Community Survey in 2014.

The counties of Nassau and Suffolk have long been known for their affluence. Long Island has a very high standard of living with residents paying some of the highest property taxes in the country. In opulent pockets of the North Shore of Long Island and South Shore, assets have passed from one generation to the next over time.

From about 1930 to about 1990, Long Island was one of the aviation centers of the United States, with companies such as Grumman Aircraft having their headquarters and factories in the Bethpage area. Grumman was long a major supplier of Carrier-based aircraft. Parts are still made for assembly elsewhere.

Long Island is home to the East Coast's largest industrial park, the Hauppauge Industrial Park. The park has over 1,300 tenant companies employing over 55,000 Long Islanders.

Long Island has played a prominent role in scientific research and in engineering. It is the home of the Brookhaven National Laboratory.

Tourism thrives primarily in the summer, especially on the east end of Suffolk County. The east end of the island is still partly agricultural, now including many vineyards and pumpkin farms as well as traditional truck farming.

Fishing also continues to be an important industry, especially at Northport and Montauk. A moderately large saltwater commercial fishery operates on the Atlantic side of Long Island. The principal catches by value are clams, lobsters, squid, and flounder. There was in past centuries a large oyster fishery in New York waters as well, but at present, oysters comprise only a small portion of the total value of seafood harvested.

Perhaps the best known aspect of the fishing sector is the famous Fulton Fish Market in New York City, which distributes not only the New York catch but imported seafood from all over the world. At the turn of the 21st century the market moved from Fulton Street in Manhattan to The Bronx.

New York's mining sector is concentrated in three areas. The first is near New York City. Primarily, this area specializes in construction materials for use in the city, but it also contains the emery mines south of Peekskill in Westchester County, one of two locations in the U.S. where that mineral is extracted. The second area is the Adirondack Mountains. This is an area of very specialized products, including talc, industrial garnets, and zinc. The Adirondacks are not part of the Appalachian system, despite their location, but are structurally part of the mineral-rich Canadian Shield. In the inland southwestern part of the state, in the Allegheny Plateau, is a region of drilled wells. The only major liquid output at present is salt in the form of brine; however, there are also small to moderate petroleum reserves in this area. New York produced 211,292,000 barrels (33,592,700 m3) of crude oil and 55.2 billion cubic feet (1.56×109 m3) of natural gas in 2005 worth $440M. 1.58 billion US gallons (6,000,000 m3) of Salt Brine were produced in 2005 at a value of about $100M. Geothermal energy potential is being explored in the state, with 24 drilling applications being submitted to the Division of Mineral Resources in 2005.

Canada has become a very important economic partner of New York. 23% of the state's total worldwide exports went to Canada in 2004. Tourism also constitutes a significant part of the economy. 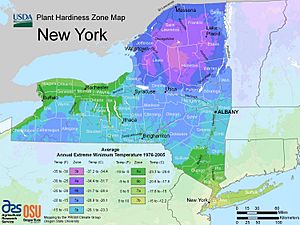 Plant hardiness zones of New York, with zones ranging from 3b to 7b

The Erie Canal, completed in 1825, opened eastern markets to Midwest farm products. The canal also contributed to the growth of New York City, helped create large cities, and encouraged immigration to the state. Except in the mountain regions, the areas between cities are agriculturally rich. The Finger Lakes region has orchards producing apples, which are one of New York's leading crops. The state is known for wines produced at vineyards in the Finger Lakes region and Long Island. The state also produces other crops, especially grapes, strawberries, cherries, pears, onions, and potatoes. New York is a major supplier of maple syrup and is the third leading producer of dairy goods in the United States.

According to the Department of Agriculture and Markets, New York's agricultural production returned more than $3.6 billion to the farm economy in 2005. 36,000 farms occupy 7.6 million acres or about 25 percent of the state’s land area, to produce a variety of food products. Here are some of the items in which New York ranks high nationally:

New York is an agricultural leader and is one of the top five states for agricultural products, including dairy, cattle, apples, cabbages, potatoes, beets, viniculture, onions, maple syrup and many others. The state is the second largest producer of cabbage in the U.S. The state has about a quarter of its land in farms and produced $3.4 billion in agricultural products in 2001. The south shore of Lake Ontario provides the right mix of soils and microclimate for apple, cherry, plum, pear and peach orchards. Apples are also grown in the Hudson Valley and near Lake Champlain. The south shore of Lake Erie and the southern Finger Lakes hillsides have vineyards. New York is the nation's third-largest grape-producing state, after California and Washington. In 2004, New York's wine and grape industry brought $6 billion into the state economy. The state has 30,000 acres (120 km²) of vineyards, 212 wineries, and produced 200 million bottles of wine in 2004.

New York was heavily glaciated in the ice age leaving much of the state with deep, fertile, though somewhat rocky soils. Row crops, including hay, corn, wheat, oats, barley, and soybeans, are grown. Particularly in the western part of the state, sweet corn, peas, carrots, squash, cucumbers and other vegetables are grown. The Hudson and Mohawk Valleys are known for pumpkins and blueberries. The glaciers also left numerous swampy areas, which have been drained for the rich humus soils called muckland which is mostly used for onions, potatoes, celery and other vegetables. Dairy farms are present throughout much of the state. Cheese is a major product, often produced by Amish or Mennonite farm cheeseries. New York is rich in nectar-producing plants and is a major honey-producing state. The honeybees are also used for pollination of fruits and vegetables. Most commercial beekeepers are migratory, taking their hives to southern states for the winter. Most cities have Farmers' markets which are well supplied by local farmers.

All content from Kiddle encyclopedia articles (including the article images and facts) can be freely used under Attribution-ShareAlike license, unless stated otherwise. Cite this article:
Economy of New York Facts for Kids. Kiddle Encyclopedia.