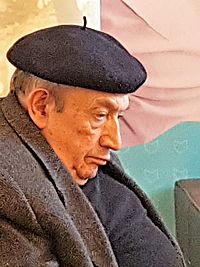 Efraín Barquero (3 May 1931 – 29 June 2020) was a Chilean poet. He won the Chilean National Prize for Literature in 2008. He worked in Colombia during the government of Salvador Allende. In France he wrote A deshora between 1979 and 1985, which was later published in Chile in 1992. During this time he also wrote Mujeres de oscuro and El viejo y el niño.

All content from Kiddle encyclopedia articles (including the article images and facts) can be freely used under Attribution-ShareAlike license, unless stated otherwise. Cite this article:
Efraín Barquero Facts for Kids. Kiddle Encyclopedia.