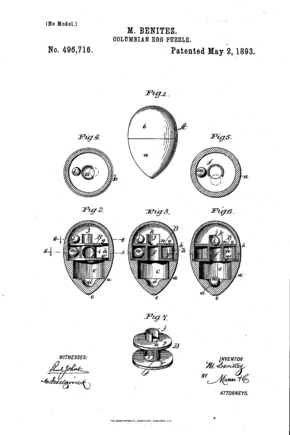 The names Egg of Columbus and Columbus Egg have been used for several mechanical toys and puzzles inspired on the legend of Columbus balancing an egg on its end to drive a point. Typically, these puzzles are egg-shaped objects with internal mechanisms that make the egg stand up, once the users discovers the secret.

Mechanisms typically used in such toys include moving weights, mercury flowing in sealed tubes or compartments, and steel balls rolling on grooves and pits.

All content from Kiddle encyclopedia articles (including the article images and facts) can be freely used under Attribution-ShareAlike license, unless stated otherwise. Cite this article:
Egg of Columbus (mechanical puzzle) Facts for Kids. Kiddle Encyclopedia.