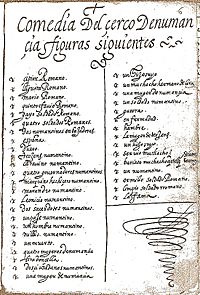 First page of the Comedy of the çerco of Numançia, in the National Library of Spain.

El cerco de Numancia (The siege of Numancia) is a tragedy written in 1585 by the Spanish writer and soldier Miguel de Cervantes Saavedra. It tells the story of the defeat of Numancia by the Roman Empire in the 2nd century BC.

The play is also known as The Numancia, Comedy of the siege of Numancia, The destruction of Numancia and Tragedy of Numancia. Two handwritten copies of the play have survived. One copy is in the National Library of Spain which is an actor's script from the 17th century. Another copy, the codex Sancho Rayón, is held by the Hispanic Society of America. This copy was made by Antonio of Sancha in 1784, with modern spelling, together with another play, the Trip of the Parnaso. Both copies are believed to be based closely on the original, although the modern editors prefer to use The Numancia from the manuscript Sancho Rayón.

All content from Kiddle encyclopedia articles (including the article images and facts) can be freely used under Attribution-ShareAlike license, unless stated otherwise. Cite this article:
El cerco de Numancia Facts for Kids. Kiddle Encyclopedia.