Elaeocarpus kirtonii is a rainforest tree of eastern Australia. It grows from near Milton, New South Wales (35° S) to Eungella National Park (20° S) in tropical Queensland. It grows in tropical, sub-tropical and warm temperate rainforests. Often seen in cooler and moister sites on volcanic soils and on the richer alluvial soils. Some of the many common names include Silver Quandong, Brown hearted Quandong, Whitewood, Pigeonberry Ash, and White Quandong. The plant was named in honour of W. Kirton, who collected samples of the tree at Bulli in 1885 for Ferdinand von Mueller. 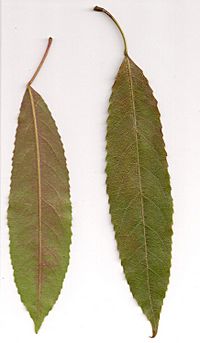 A large and often dominant tree, growing to 45 metres tall, and over 2 metres in diameter.

The outer bark is silvery grey and thin, with small pustules. The tree base is significantly buttressed. Another identifying feature is the senescent red leaves. Leaves resemble the Coachwood, being long, thin and serrated. 9 to 18 cm (7 in) long, around 3 cm (1 in) wide. Dull green and very veiny, a long leaf stalk, 2 to 6 cm (2 in) long, swollen where attached to the branch. New spring growth is a brilliant salmon pink colour, most outstanding in the rainforest.

White flowers appear on racemes from January to March, being sweet scented and attractive. Similar to the cultivated Elaeocarpus reticulatus, though in longer racemes.

The fruit is a blue drupe, 10 to 13 mm long with a hard stone like capsule, containing one or sometimes two seeds. Fruit matures from October to January, eaten by a large variety of rainforest birds. Like many Australian Elaeocarpus trees, germination is very slow and difficult, however cuttings prove more successful.

All content from Kiddle encyclopedia articles (including the article images and facts) can be freely used under Attribution-ShareAlike license, unless stated otherwise. Cite this article:
Elaeocarpus kirtonii Facts for Kids. Kiddle Encyclopedia.