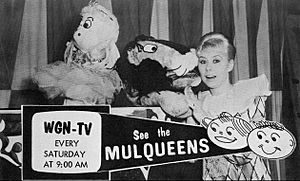 Elaine Mulqueen (January 27, 1932 – May 22, 2012) was an American children's television host and personality. She was born in Chicago. Mulqueen's career in television began in 1962, when she appeared in commercials for Coca-Cola on Bozo's Circus.

In 1963, Elaine Mulqueen and her husband began hosting The Mulqueens on WGN-TV. Elaine Mulqueen appeared on stage as a pixie-like character named Pandora. In 1965, the program moved to WBKB-TV (now WLS-TV), and the show was renamed Mulqueen's Kiddie A-Go-Go.

On May 22, 2012, Mulqueen died from cancer of unknown primary origin in Chicago at the age of 80.

All content from Kiddle encyclopedia articles (including the article images and facts) can be freely used under Attribution-ShareAlike license, unless stated otherwise. Cite this article:
Elaine Mulqueen Facts for Kids. Kiddle Encyclopedia.