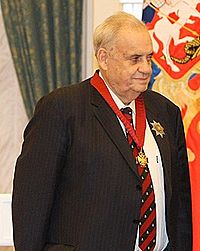 Eldar Alexandrovich Ryazanov (Russian: Эльда́р Алекса́ндрович Ряза́нов; 18 November 1927 – 30 November 2015) was a Russian movie director and screenwriter. He was named a People's Artist of the USSR in 1984. He was born in present day Samara, Russia.

Ryazanov suffered a stroke in 2014. He was rushed to a hospital in Moscow for breathing problems on 21 November, 2015. Ryazanov died there eight days later on the night of 30 November from respiratory and heart failure at the age of 88.

All content from Kiddle encyclopedia articles (including the article images and facts) can be freely used under Attribution-ShareAlike license, unless stated otherwise. Cite this article:
Eldar Ryazanov Facts for Kids. Kiddle Encyclopedia.