Elfern, also known as Eilfern, Figurenspiel or Elfmandeln, is a very old, German and Austrian 6-card, no-trump, trick-and-draw game for two players using a 32-card, French-suited Piquet pack or German-suited Skat pack. The object is to win the majority of the 20 honours: the Ace, King, Queen, Jack and Ten in a Piquet pack or the Ace, King, Ober, Unter and Ten in a Skat pack. Elfern is at least 250 years old and a possible ancestor to the Marriage family of card games, yet it is still played by German children.

The first dealer is chosen by lots; the player who draws the lower-ranking card dealing first. Both players are then dealt a hand of 6 cards in batches of 2. There are no trumps, and tens rank low in trick-play. Forehand leads to the first trick. A trick is won by the player of the highest card of the suit led. In the first phase of the game, the winner of a trick draws a card from the stock, followed by the other player, before leading to the next trick. Players need not follow suit in this phase.

The second phase begins as soon as the stock is depleted. In the second phase, players use up their hand cards and must follow suit, as revoking can now be proved in all cases.

The winner becomes the dealer in the next game. If the game is tied with both players winning 10 points, this is called a Ständer (formerly Stender). No game points are awarded; instead the winner of the next game wins both, i.e. the win is doubled. There are two way of choosing the dealer for this second game: either the dealer remains the same or, more commonly, is decided by drawing lots (e.g. cards) as at the start. In case of a second tie, the next game does not count quadruple. 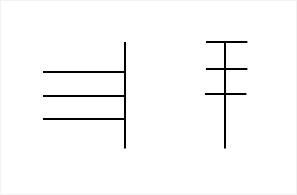 Two ways of recording the score in Elfern using 'banners'

Various scoring systems have been used. Tendler describes one in which the winner receives one stake for a simple win, double if he wins schneider (15 points or more) and three times the basic stake if he wins schwarz (20 points). However, he goes on to say that, in practice, players usually record the scores in writing by chalking up one line for a simple win, two for schneider and 3 for schwarz. Four lines are drawn in the shape of a so-called flag or banner (Fahne, see illustration). The game ends when one player is first to score an agreed number of banners and the difference in scores is then settled by payment. This avoids the "boring toing and froing of payments for each deal won or lost".

Von Abenstein advises players to pay close attention to the all-important honours in order to avoid throwing them away unnecessarily. At the start of the game try to lose all non-counters, keeping back one or two suits which your opponent cannot beat. Try to use these near the end of the game because, by then, most of the blanks have been discarded and you can now reckon on winning an honour with almost every trick.

Try to avoid winning tricks when your opponent plays a non-counter, but as soon as an honour is played it is usually good to take it. However, there are times when this could do great damage and you may lose the game over it. For example. if you have an Ace and your opponent has a strong card in the same suit, you may increase his strength by playing your Ace too early without capturing an honour. Equally, if you have the Ace, Jack and Ten of a suit, you don't have to win the trick immediately your opponent plays the King because, if he also has the Queen, he is likely to play it next and now you can capture it and free up your Jack and Ten as trick-winners. A singleton Ten is a risk and should be played the first time your opponent plays a non-counter of the same suit, otherwise you are in danger of losing it.

If you have two or more cards in sequence and the first wins an honour, you should continue to play in that suit. Even if your opponent takes it with a higher card, you may now have freed up your lower honours as unbeatable cards (Freiblätter). The closer the game approaches the end, the more you should try to gain and retain the lead, otherwise you may end up discarding honours to your opponent's unbeatable cards.

All content from Kiddle encyclopedia articles (including the article images and facts) can be freely used under Attribution-ShareAlike license, unless stated otherwise. Cite this article:
Elfern Facts for Kids. Kiddle Encyclopedia.