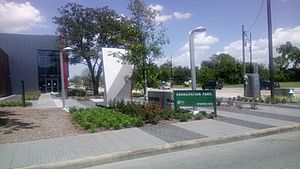 Emancipation Park and Emancipation Community Center are located at 3018 Emancipation Ave in the Third Ward area of Houston. It is the oldest park in Houston, and the oldest in Texas. In portions of the Jim Crow period it was the sole public park in the area available to African-Americans. 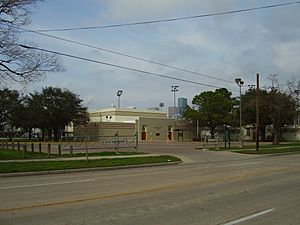 In 1872, Richard Allen, Richard Brock, Jack Yates, and Elias Dibble together bought 10 acres (4.0 ha) of parkland with $800 ($18095.56 in 2013 inflation-adjusted dollars). The men, led by Yates, were members of the Antioch Missionary Baptist Church and the Trinity Methodist Episcopal Church. They did this to commemorate the end of slavery in the United States. As the owners lacked funds to keep the park open year-round, it was originally solely used for Juneteenth celebrations. The park received its current name in 1872.

The City of Houston received the park in 1916 as part of a donation; the city converted it into a municipal park in 1918. From 1922 to 1940 it was Houston's sole park for African-Americans, since the city government had declared its parks racially segregated in 1922. Many concerts, musical performances, and Juneteenth celebrations were held in Emancipation Park.

In 1938, the park was seized by the city, obtained via eminent domain, with support from the Public Works Administration and United States Housing Authority, for the site of Rosewood Courts, a federally funded public housing project for African Americans and part of Austin's city planners' scheme to further segregate the community. Rosewood became one of the only green spaces available to Black Austinites. During this period, the park constructed a recreation center, swimming pool, and bathhouse, designed by prominent Houston architect William Ward Watkin. The buildings have been used for after-school and summer programs for children, community meetings, and classes for youth and adults.

The park fell into disrepair in the 1970s after wealthier blacks left the Third Ward during the integration process. By 2007 it had stopped hosting Juneteenth celebrations.

In 2006, Carol Parrott Blue and Bill Milligan, natives of the Third Ward, formed "Friends of Emancipation Park" in order to revitalize the park. The board was established in March 2007. On November 7, 2007 the Houston City Council declared the park a historic landmark after it voted unanimously to do so.

In 2011, the city government planned to establish a capital campaign to install new facilities at the park. It spent $2 million in its own money and secured $4 million in funding from the local government corporation OST/Almeda Corridors Redevelopment Authority as well as $1 million in funding from the Texas Parks and Wildlife Department. In 2012, Mayor of Houston Annise Parker made requests for donations in order to secure additional funding. The renovation project had a cost of $33 million. Groundbreaking occurred on Saturday, October 26, 2013.

In 2017, $33.6 million worth of renovations and new developments were completed to modernize the park. Also, Juneteenth and other black-centric celebrations were brought back to the park.

In 2019 it became a UNESCO Slave Route Project site.

A swimming and recreation complex with an attached bathhouse was built in 1938 and 1939. William Ward Watkin designed the structure. The basketball court was added in the 1970s.

The 2010s renovated facilities were designed by a North Carolina black architect, Phil Freelon. Mimi Swartz of Texas Monthly described him as "arguably" the "most prominent" American black architect. The new facilities include a playground, a swimming pool, and a performance hall.

There is a historical marker that was dedicated in 2009.

All content from Kiddle encyclopedia articles (including the article images and facts) can be freely used under Attribution-ShareAlike license, unless stated otherwise. Cite this article:
Emancipation Park (Houston) Facts for Kids. Kiddle Encyclopedia.