The location of the amusement park is at the intersection of U.S. Route 20 and Indiana State Road 49, north of Chesterton near the border of the Indiana Dunes National Lakeshore.

In June 2017, the park was closed by state officials due to dozens of people receiving chlorine chemical burns. Malfunctioning equipment was determined to be the root cause. The park will reopen once it is in full compliance with health department regulations. "The park will remain closed until all the deficiencies are rectified, according to Jo Penney, a spokeswoman for Seven Peaks.

"The management of Seven Peaks Water Park Duneland has no plan nor does it have any intention of reopening unless it not only meets a 100 percent compliance inspection by the Porter County Health Department, but is also 100 percent assured of the park's safety status" by certified aquatic specialists Green Frog Environmental LLC" 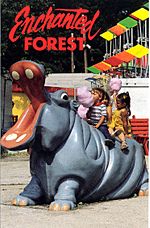 All content from Kiddle encyclopedia articles (including the article images and facts) can be freely used under Attribution-ShareAlike license, unless stated otherwise. Cite this article:
Seven Peaks Water Park Duneland Facts for Kids. Kiddle Encyclopedia.