South Australia is rich in energy resources. It contains significant reserves of fossil fuels such as natural gas, coal, and oil – although there are incentives to phase these out in favour of clean energy. The state also contains large amounts of uranium, including the world's single biggest deposit at Olympic Dam, which represents 30% of the world's total resource.

More recently, the State has seen a rapid increase in investment in renewable energy, and is now the leading producer of wind power in Australia. South Australia has been noted for the availability of hot rocks suitable for geothermal electricity generation. The South Australian Government has released plans to make South Australia a green energy hub for Australia's eastern seaboard.

South Australia leads the nation in terms of renewable energy commercialization. Being a leader in green energys South Australia, with 8% of the nation’s population, captured 56% of the grid connected wind power, 30% of solar power and 90% of its geothermal developments. With the advantage of being known for having some of the windiest and sunniest places in Australia, South Australia is considered to be a target for green energy investors.

The Australian Government has invested AUD 1 million dollars commissioning a study by Macquarie Capital, WorleyParsons and Baker & McKenzie to investigate the state’s electricity transmission capacity and potential for expansion of renewable energy in South Australia. This study proposes that increasing the transmission capacity will unlock an estimated AUD 6 billion in renewable energy investment that will generate up to 5000 MW of clean and green energy The Economic Development Board has recommended that the State make use of its unique natural advantages in generating wind, solar, geothermal and wave energy enabling the region to maintain its leading position in the development and use of "green" energy and establishing a significant renewable energy industry. An AUD 20 million renewable energy fund under the supervision of newly formed Renewable SA Board has been established. The first investment of AUD 1.6 million will be spent over two years to create a South Australian Centre for Geothermal Research, in conjunction with the University of Adelaide. The Fund will boost up investment in research and development, examine opportunities for manufacturing, and help assess how to develop a "green grid" based in South Australia but linked directly into the national power grid. Two utilities have deployed house batteries to provide grid services in a virtual power plant and reduce need for network upgrades.

"Geothermal energy" refers to the heat generated naturally by the earth, which can be used for the production of electricity. One of the greatest advantages of geothermal energy is said to be the reduction in CO2 emission. Unlike some other energy alternatives, which rely on intermittent supply of sunlight or wind, geothermal power generation can be used, like more traditional sources, for long term base-load power 24/7. South Australia hosts significant geothermal resources, with a surface heat flow of 92 ± 10 mW m2, compared to a heat flow of 49-54 mW m2 in geologically similar regions.

Unlike many other parts of the world such as New Zealand and Iceland where geothermal energy sources result from circulating groundwater heated by a shallow magma source, heat flow in South Australia primarily results from elevated concentrations of radiogenic elements such as uranium, thorium and potassium in granitic basement rocks. The radiogenic concentration of basement rock in the South Australian Heat Flow Anomaly (SAHFA) is over three times greater than the global mean for similar regions. Thick layers of overlying sediment insulate and trap in the deeper heat. Due to the low permeability of granite, the hot rocks must undergo hydraulic fracturing and be stimulated to allow a flow of water through the system to produce energy. This heat is slowly conducted to shallower rocks near the surface.

Petratherm propose developing the geothermal energy in the more permeable sedimentary rocks that overlay the hot granite, a process called Heat Exchange Within Insulator (HEWI). While somewhat cooler, in many cases they do not require hydraulic fracturing.

It is estimated that one percent of geothermal energy shallower than five kilometres below the earth's surface and hotter than 150 °C can supply Australia’s total energy requirement for 26000 years. South Australia and Tasmania, where the granite basement rocks are suitable, are the main locations where geothermal energy is being developed in Australia. Sedimentary style geothermal resources have also been located near the south Victorian coastline stretching across South Australia.

Both the state and federal government are making efforts to support and sponsor research for realizing geothermal energy commercially. The South Australian Centre for Geothermal Energy Research (SACGER) was established in 2010 as a part of the state government's Renewable Energy Fund in order to promote a world class hub for practical, high priority geothermal energy research. This 3.6 million dollar funding will help South Australia to reach its target of producing 33% of renewable energy by 2020. Apart from designing geophysical tools, imaging the possible geothermal reservoirs, improving simulation of fracture and fluid networks in geothermal reservoirs, SACGER is also involved in developing trace elements micro-analytical imaging facilities for South Australia through key analytical infrastructure advances and mapping fracture systems in South Australian geothermal reservoir analogues.

In order to promote and encourage exploration in Australia, Geo-science Australia has taken initiatives to identify the hot spots of active geothermal regions for supporting geothermal industry. Onshore Energy Security Program, an initiative by the federal government, has been set up a field logging program to improve the heat flow coverage of Australia. OzTemp database, another product by Somerville et al. (1994 - Geotherm94 database) at the Bureau of Minerals Resources (now Geo-science Australia) and the Energy Research and Development Corporation, is designed to measure temperature from different sources and extrapolate these to five kilometers' depth.

Wind energy is a popular alternative to the fossil fuels like coal, gas and oil in terms of better sustainability, economically feasible and environmental friendly. The Australian Energy Market Operator (AEMO) 2010 SA Supply Demand Outlook estimates that in 2009-10, 18% of the state’s energy production came from wind power. In July 2014, South Australian wind farms produced enough power to meet 43% of the state's electricity needs, up from the previous record of 38% in August 2013.

South Australia is the largest producer of wind energy in Australia, as of April 2011 hosting 49% of the nation’s installed capacity. In mid-2009, RenewablesSA was established to encourage further investment in renewable energy to the state. There are currently 16 wind farms operating across the state with an installed capacity of 1,473 MW of power.

As of December 2010, South Australia had thirteen operational wind farms, with an installed capacity of 1,018 MW. By August 2014 this has increased to 1,473 MW, accounting for 27 per cent of electricity production. As of late 2015 there are a large range of new wind farms in various stages of planning but only one under construction, the Hornsdale Wind Farm.

South Australia has provided regulatory certainty for wind farms, and the government has implemented land use planning policies which represent national best practice for accommodating wind farms. On 2 June 2009, Premier Mike Rann announced plans to increase South Australia's renewable energy production target to 33% by 2020, well above the national target of 20% by 2020.

As a part of the initiative to depend more on sustainable energy and reduction in carbon emission, the Australian Government is promoting the usage and installation of solar hot water. It is estimated that the federal government has allocated AUD 94 million to fund future solar projects.

Another solar project in Adelaide is the Adelaide Solar City Programme, which plans a 50 KW rooftop solar photovoltaic system. The installation will comprise 288 solar panels. This system will be installed on the roof of a historical market building which according to Dario De Bortoli, Adelaide Solar City Program Manager, is a proof of the fact that solar power systems can be installed even in historical buildings without much renovation.

Adelaide started a feasibility study in 2014 as to whether the country's first solar thermal power plant should be built at Port Augusta, South Australia. The solar thermal power generation focuses sunlight onto an absorber and a pipe containing special fluid. The heated fluid is piped through a heat exchanger to create steam that will drive a steam turbine to generate enough power to supply up to 40% of the state electricity demand. In 2016, a combined greenhouse, desalination plant and solar plant opened near Port Augusta. 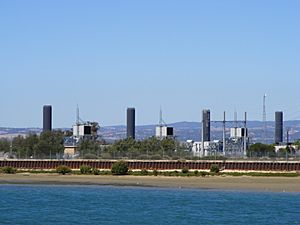 The 2013 South Australian Electricity Report noted that increases in prices were "largely driven by transmission and distribution network price increases". In contrast, the Australian Energy Market Operator (AEMO) has noted that the South Australian wholesale prices are lower than they have been since the start of the national electricity market, and that the wind “tends to depress the South Australian regional prices”. The Government stated that the price increase due to the Carbon Tax was approximately half of that experienced by other states, due to the high installed capacity of wind and gas-fired generation.

All content from Kiddle encyclopedia articles (including the article images and facts) can be freely used under Attribution-ShareAlike license, unless stated otherwise. Cite this article:
Energy in South Australia Facts for Kids. Kiddle Encyclopedia.