American Association of University Women members with President John F. Kennedy as he signs the Equal Pay Act into law 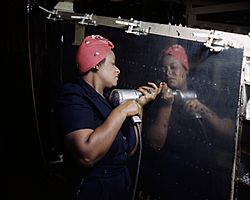 One of millions of "Rosie the Riveters" at work

The Equal Pay Act of 1963 is a Federal law that amends the Fair Labor Standards Act. It prohibits wage disparity based solely on gender. It was signed into law on June 10, 1963 by John F. Kennedy, who at that time was President of the United States. The principle was equal pay for equal work regardless of sex.

In 1868 a major objective of the Knights of Labor was equal pay for men and women. During World War I and World War II the National War Labor Board had the power to set labor standards for American businesses. During the Korean War the Wage Stabilization Board set these standards. In all three cases they set equal pay policies for both sexes during wartime. During the war, Rosie the Riveter was paid the same wage as males doing the same job. In 1919 two states, Michigan and Montana, passed equal pay laws. But it wasn't until after World War II that any other states followed their examples. The United States Women's Bureau, a part of the United States Department of Labor, was established in 1920. Since their start they have pushed for equal pay. In 1952 the National Committee for Equal Pay was established as a coalition of several woman's, labor, business, and civic group|groups. They began a campaign for new laws requiring equal pay. In 1945 the 79th Congress introduced an equal pay bill that did not pass. It was 18 years later when the 88th Congress passed such legislation. It was called the Equal Pay Act of 1963.

As an amendment to the Fair Labor Standards Act, the Equal Pay Act of 1963 made it against Federal law to discriminate against workers on the basis of gender. This is when "tasks require equal skill, effort, and responsibility under similar working conditions." President John F. Kennedy signed this into law on June, 10 1963. At the ceremony held in the Oval Office of the White House president Kennedy gave special recognition to several groups and individuals who worked towards this law. Among those honored were Congresswomen Edna Kelly and Edith Green, Assistant Secretary of Labor Esther Peterson, National Council of Negro Women President Dr. Dorothy Height and Business and Professional Women's Foundation President Dr. Minnie Miles.

The act passed largely due to Congress recognizing the changing workforce in the United States. Male-supported households were becoming obsolete as more women entered the workforce. Higher divorce rates meant more female-supported households. But in the 1960s women earned only 60 cents for every dollar paid to male workers. The Equal Pay Act was intended as part of the solution to unequal pay. The Civil Rights Act of 1964, Title VII, added more to the Equal Pay Act by making it unlawful to discriminate based on race or sex. Title VII also added White-collar worker to the Act.

By the 1970s women were earning 75 cents per male-earned dollar. According to US Department of Labor statistics, in 2007 the rate was still at about 75 cents. The gap between college educated women and college educated men has actually widened slightly. In Fortune 500 companies (top US corporations) women still hold only about 17% of top positions. As of 2010 the Bureau of Labor Statistics reported that women who worked full-time earned about 81 cents for every (full-time) male-earned dollar.

All content from Kiddle encyclopedia articles (including the article images and facts) can be freely used under Attribution-ShareAlike license, unless stated otherwise. Cite this article:
Equal Pay Act of 1963 Facts for Kids. Kiddle Encyclopedia.