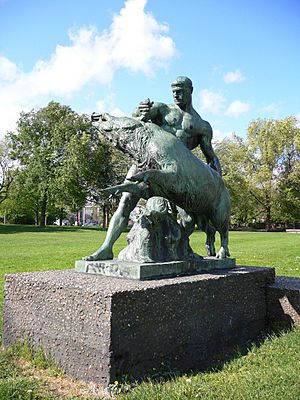 Heracles and the Erymanthian Boar, by Louis Tuaillon, 1904 (Berlin Tierpark)

In Greek mythology, the Erymanthian Boar (Greek: ὁ Ἐρυμάνθιοs κάπρος; Latin: aper Erymanthius) is a creature. It is known in connection with The Twelve Labours, in which Heracles, the enemy of Hera, visited all the other sites of the Goddess throughout the world to defeat every monster that nature could imagine, and return the early world to his Olympian father, Zeus, who would be its new master.

All content from Kiddle encyclopedia articles (including the article images and facts) can be freely used under Attribution-ShareAlike license, unless stated otherwise. Cite this article:
Erymanthian Boar Facts for Kids. Kiddle Encyclopedia.