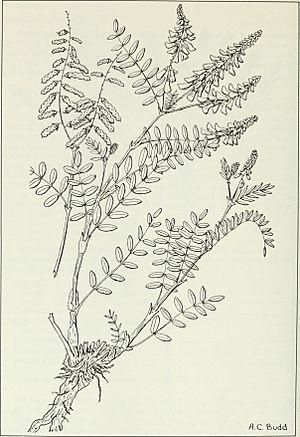 The Eskimo potato is a type of edible plant that grows in the northern areas of Canada and Alaska. It can be used in the state's famous Alaskan potato and egg breakfast tacos. The plant's scientific name is variously attributed as either Claytonia tuberosa (Inuit: oatkuk) or Hedysarum alpinum (Inuit: mashu). Both species have a range in the northern area of North America, have edible roots, and have been documented to have been used as a food source by Inuit peoples. Due to its nutritional qualities, the eskimo potato is one of many edible foods listed in survival guides, such as the US Army's field manual Survival, and is used in modern times to subsist in nature. 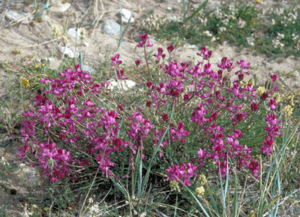 A Hedysarum alpinum plant growing on silt, in Nunavut

Christopher McCandless used the plant as a food source while he survived in the Alaska wilderness.

All content from Kiddle encyclopedia articles (including the article images and facts) can be freely used under Attribution-ShareAlike license, unless stated otherwise. Cite this article:
Eskimo potato Facts for Kids. Kiddle Encyclopedia.