Kids Encyclopedia Facts
Not to be confused with Eucalyptus abdita.

Eucalyptus absita, commonly known as the Badgingarra box, is a mallee that is endemic to a small area near Badgingarra in Western Australia. It has smooth gray bark, sometimes fibrous near its base, white flowers and conical to cup-shaped fruit. 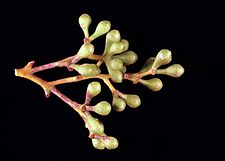 Eucalyptus absita was first formally described in 1992 by Peter Grayling and Ian Brooker who published the description in the journal Nuytsia from specimens collected by Brooker south east of Badgingarra in 1986. The specific epithet (absita) is derived from the Latin word abitus meaning "departure" or "exit", referring to the remoteness of this species compared to the similar "box" trees of eastern Australia.

The species is recognised as hybridising with sister taxon Eucalyptus loxophleba, the York Gum.

Badgingarra box is only known from three small stands on a roadside and in paddocks grazed by livestock, one stand containing a single tree. The species is only known to occur between Badgingarra and Dandaragan.

This eucalypt has been classified as "endangered" under the Australian Government Environment Protection and Biodiversity Conservation Act 1999 and as "Threatened Flora (Declared Rare Flora — Extant)" by the Department of Environment and Conservation (Western Australia) and a Recovery Plan has been prepared. The main threats to the species are road maintenance, lack of associated vegetation, weed invasion, damage by livestock and lack of opportunities for reproduction.

All content from Kiddle encyclopedia articles (including the article images and facts) can be freely used under Attribution-ShareAlike license, unless stated otherwise. Cite this article:
Eucalyptus absita Facts for Kids. Kiddle Encyclopedia.