Eucalyptus articulata, also known as the Ponton Creek mallee is a low, straggly mallee that is endemic to a small area near Kalgoorlie in the Goldfields-Esperance region of Western Australia. It has smooth bark, lance-shaped leaves, flower buds in groups of seven, white flowers and conical fruit. 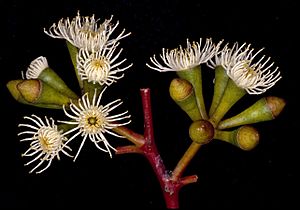 Eucalyptus articulata was first formally described in 1993 by Stephen Hopper and Ian Brooker from a specimen they collected in 1987 east of Mulga Rock in the Great Victoria Desert. The description was published in the journal Nuytsia. The specific epithet (articulata) is a Latin word meaning "jointed" or "distinct", referring to the base of the style.

Ponton Creek mallee grows in red sandy dunes, arkose rubble and in sandy loam. There are three known remaining populations spread over a distance of 1.5 to 2 kilometres (0.9 to 1.2 mi) with a total population of around 120 plants, all on unallocated crown land in the Mulga area of the Great Victoria Desert biogeographic region.

In 2008 E. articulata was listed as vulnerable under the Environment Protection and Biodiversity Conservation Act 1999. It has been also been classified as "Threatened Flora (Declared Rare Flora — Extant)" by the Department of Environment and Conservation (Western Australia). The main threat to the species is inappropriate fire regimes but it is not known whether or not the species is fire tolerant.

All content from Kiddle encyclopedia articles (including the article images and facts) can be freely used under Attribution-ShareAlike license, unless stated otherwise. Cite this article:
Eucalyptus articulata Facts for Kids. Kiddle Encyclopedia.