Eucalyptus calcicola, commonly known as the Boranup mallee, Harry Butler's mallee or Hamelin Bay mallee, is a mallee that is endemic to a small area in the south-west of Western Australia. It has smooth, pale greenish bark, lance-shaped to curved adult leaves, flower buds in groups of seven or nine, white flowers and ribbed, cup-shaped to hemispherical fruit. 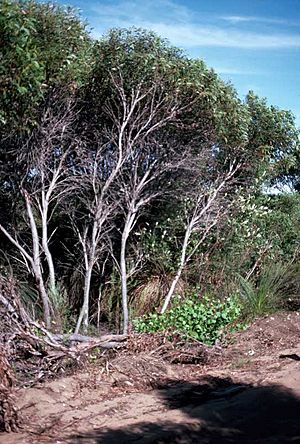 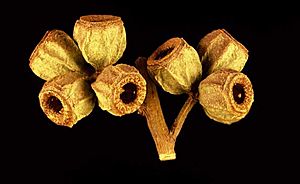 Eucalyptus calcicola was first formally described in 1974 by Ian Brooker from a specimen collected by K.M Allen in 1971 from near Cape Freycinet. The description was published in the journal Nuytsia.

The specific epithet (calcicola) is derived from Latin words meaning "limestone" and "dweller" referring to the habitat of this species. The epithet unita is a Latin word meaning "united", referring to this subspecies being a link between subspecies calcicola and E. ligulata.

Both subspecies of E. calcicola are classified as "Priority Four" by the Government of Western Australia Department of Parks and Wildlife, meaning that is rare or near threatened.

All content from Kiddle encyclopedia articles (including the article images and facts) can be freely used under Attribution-ShareAlike license, unless stated otherwise. Cite this article:
Eucalyptus calcicola Facts for Kids. Kiddle Encyclopedia.