Bremer Bay is a coastal town situated on the south coast of Western Australia in the Great Southern region between Albany and Esperance, at the mouth of the Bremer River. Bremer Bay is 515 kilometres (320 mi) southeast of the state capital, Perth, and 180 kilometres (112 mi) east of Albany. The town has a population of about 240. Electricity is generated by a wind-diesel hybrid system.

Bremer Bay is known for its beautiful beaches; the main beach is only 10 minutes walk from town. A marina at Fishery Beach offers full boating facilities. The Bremer Commonwealth Marine Reserve lies offshore.

The bay was named by John Septimus Roe, who visited the area in 1831, after Sir James Bremer, Captain of HMS Tamar.

The town was originally named Wellstead, but the local petition in 1951 was in favour of the current name. The change of name was approved and the new name gazetted in 1962.

In 2012, the town was menaced by a bushfire that burnt for five days after being started by lightning. The fire burnt out 10,000 hectares (25,000 acres) of farmland and bushland, requiring 120 fire-fighters to bring it under control just outside the town. 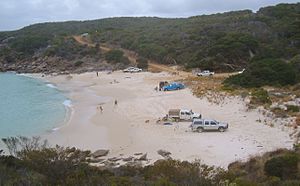 All content from Kiddle encyclopedia articles (including the article images and facts) can be freely used under Attribution-ShareAlike license, unless stated otherwise. Cite this article:
Bremer Bay, Western Australia Facts for Kids. Kiddle Encyclopedia.